Vritra is a Vedic serpent or dragon in Hinduism, the personification of drought and adversary of Indra (king of the highest heaven).

Vritra is identified as an Asura[1]. Vritra is also known in the Vedas as Ahi (“snake”).

Vritra appears as a dragon blocking the course of the rivers and is heroically slain by Indra.
According to the Rig Veda, Vritra kept the waters of the world captive until he was killed by Indra, who destroyed all the ninety-nine fortresses of Vritra before liberating the imprisoned rivers. 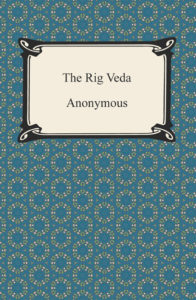 According to the Rig Veda, Vritra imprisoned the waters of the world captive until he was killed by Indra, who destroyed all the ninety-nine fortresses before liberating the imprisoned rivers.

The combat began soon after Indra was born, and he had drunk a large volume of Soma at Tvashtri’s house to empower him before facing Vritra.
Tvashtri fashioned the thunderbolt (Vajrayudha) for Indra, and Vishnu, when asked to do so by Indra, made space for the battle by taking the three great strides for which he became famous.

Vritra broke Indra’s two jaws during the battle, but was then thrown down by the latter and, in falling, vanquished the fortresses that had already been shattered.
For this feat, Indra became known as Vritrahan “slayer of Vritra” and also as “slayer of the first-born of dragons”.
Vritra’s mother, Danu (who was also the mother of the Danava race of Asuras), was then attacked and defeated by Indra with his thunderbolt.

Introduction to the Vedas

Vedas are the earliest Hindu scriptures, written in early Sanskrit, containing hymns, philosophy, and guidance on ritual for the priests of Vedic religion.
Believed to have been directly revealed to seers among the early Aryans in India, and preserved by oral tradition, the four main collection are known as ‘Vedas’.

The Vedas are therefore regarded as Shruti in Hinduism meaning “what is heard” as contrasted with other texts designated Smritis (“what is remembered”), accounts of great heroes and their struggles in works such as the Mahabharata, Ramayana, and Bhagavad Gita (although some sects of Hinduism regard the Bhagavad Gita as Shruti).

The texts which make up the Four Vedas are:

The Vedas are large body of texts originating in ancient India, composed in Vedic Sanskrit. Ancient Hindu Rishis (seers) considered the Vedas to be ‘Apaurusheya’ which means “not of a man, superman and” impersonal, but the exploration of whole universe, Vedas are authorless. The Vedas are not only ruminations of Vedic rishis but they had intuited the impersonal truth, the knowledge at their highest level of consciousness and soul.

The Rig Veda is the earliest of the four Vedas. The Sama Veda, Yajur Veda and Atharva Veda were compiled after the age of the Rig Veda and are ascribed to the Vedic period.

The most celebrated and well-known part of the Vedas is undoubtedly the Rigveda.
The Rigveda — Sanskrit Rig-Veda, a compound of individual strophes called ṛc (ric), meaning “a sacred verse recited in praise of deity” and Veda means knowledge.
Thus, we can understand the direct meaning of Rigveda to be “The knowledge of sacred recitation”.

The Rig Veda is a collection of inspired songs or hymns and is a main source of information on the Rig Vedic civilization.
It is the oldest book in any Indo-European language and contains the earliest form of all Sanskrit mantras, dating back to 1500-1000 BCE. Some scholars date the Rig Veda as early as 12000-4000 BCE. The Rigveda was preserved orally before it was written down about 300 BCE.

The Rig-Vedic ‘samhita’ or collection of mantras consists of 1,017 hymns or ‘sūktas’, covering about 10,600 stanzas, divided into eight ‘astakas,’ each having eight ‘adhayayas’ or chapters, which are sub-divided into various groups.

The hymns are the work of many authors, or seers, called ‘rishis.’ There are seven primary seers identified: Atri, Kanwa, Vashistha, Vishwamitra, Jamadagni, Gotama and Bharadwaja.

An early stage of Vedic religion

The Rig Veda accounts comprehensively the social, religious, political and economic background of the Rig-Vedic civilization.
Even though monotheism characterizes some of the hymns of Rig Veda, naturalistic polytheism and monism can be discerned in the religion of the hymns of the Rig Veda.

The Rigveda is far more ancient than any other Indo-Aryan text. For this reason, it was at the centre of attention of western scholarship from the times of Max-Muller and Rudolf Roth onwards. The Rigveda record an early stage of Vedic religion.

The manuscripts were written in Brahmi script on materials made from birch bark or palm leaves, which decompose fairly quickly in the topical climate and therefore, were routinely copied over the generations to help preserve the text until the advent of the printing press from the 16th century.

This philosophical reflection characterizes the essence of Hinduism in that the point of personal existence is to question it as one moves from the basic needs of life toward self-actualization and union with the Divine.

The Rig Veda encourages these kinds of questions through hymns to various gods — Agni, Mitra, Varuna, Indra, and Soma notably — who would eventually be seen as avatars of the Supreme Over Soul, First Cause, and source of existence, Brahman.

This is the ancient and accepted pathway by which all Gods have come into existence.
Hereby could one be born though waxen mighty. Let him not, otherwise, destroy his Mother.

Not this way go I forth: hard is the passage. Forth from the side obliquely will I issue.
Much that is yet undone must I accomplish; one must I combat and the other question.

He bent his eye upon the dying Mother: My word I now withdraw. That way I follow.
In Tvaṣṭar’s dwelling India drank the Soma, a hundredworth of juice pressed from the mortar.

What strange act shall he do, he whom his Mother bore for a thousand months and many autumns?
No peer hath he among those born already, nor among those who shall be born hereafter.

Deeming him a reproach, his mother hid him, Indra, endowed with all heroic valour.
Then up he sprang himself, assumed his vesture, and filled, as soon as born, the earth and heaven.

With lively motion onward flow these waters, the Holy Ones, shouting, as ‘twere, together.
Ask them to. tell thee what the floods are saying, what girdling rock the waters burst asunder.

Are they addressing him with words of welcome? Will the floods take on them the shame of Indra?
With his great thunderbolt my Son hath slaughtered Vṛtra, and set these rivers free to wander.

I cast thee from me, mine, — thy youthful mother: thee, mine own offspring, Kusava hath swallowed.
To him, mine infant, were the waters gracious. Indra, my Son, rose up in conquering vigour.

Thou art mine own, O Maghavan, whom Vyaṁsa struck to the ground and smote thy jaws in pieces.
But, smitten through, the mastery thou wonnest, and with thy bolt the Dāsa’s head thou crushedst.

The Heifer hath brought forth the Strong, the Mighty, the unconquerable Bull, the furious Indra.
The Mother left her unlicked Calf to wander, seeking himself, the path that he would follow.

Then to her mighty Child the Mother turned her, saying, My son, these Deities forsake thee.
Then Indra said, about to slaughter Vṛtra, O my friend Vṛtra, stride full boldly forward.

Who was he then who made thy Mother widow? Who sought to stay thee lying still or moving?
What God, when by the foot thy Sire thou tookest and slewest, was at hand to give thee comfort?

In deep distress I cooked a dog’s intestines. Among the Gods I found not one to comfort.
My consort I beheld in degradation. The Falcon then brought me the pleasant Soma.