Welcome on the Wisdom web! ― Wisdom from all corners of the world ―
Philosophy of the Wheel ― Wisdoms in the English language

This Wheel connects the three Quests for wisdom

The Wheel stands for a multidimensional and multiform approach to the intercultural art of living. It is dynamically visualized philosophy, using colors and orientation (shown two dimensionally in the circle as centripetal direction from periphery to center and vice versa as centrifugal movement).

The three Quests start from the awareness that wisdom has various forms and layers. This wisdom comes from the different cultural (mythical, religious and spiritual) traditions and is expressed in artistic, philosophical, religious, mythological, craft and ritual expressions.

The Wheel visualizes how the plurality of expressions varies in different cultural traditions and at the same time circles around a pivot ― a quest for wisdom on how to live ‘the good life’. The colours in the four quadrants and in the center refer to the symbolism of the five natural elements (earth, water, air, fire and ether) and they spiral around the axis, the white small circle, in which the four colored quadrants meet.

The symbolism of the natural elements 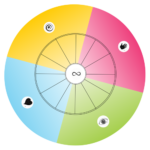 By using the symbolism of the five elements, the QFWF remains outside the philosophical, theological and political debates about the ranking of cultures and religious conflicts.
This symbolism is part and parcel of the mythology in almost all cultures. It can be heard in myths of creation as well as in stories about heroes. As a mythical language the five elements earth, water, air, fire and ether tell about the separation and reconnection of the natural elements, symbolizing alchemy as a creative process. A process that may generate a natural order arises out of an original chaos, or emptiness or by divine creation.

For example: The alchemical art of converting lead into gold.
The mythical symbolism on the five elements and archetypal symbols like the alchemist and the tree of life, unfold an inter-cultural order that is represented in the Wheel.

The four quadrants of the Wheel symbolize the cultural diversity of expressions and emphasize the differences. The differences appear on the basis of a shared core, represented as the center of the Wheel (the pivotal point).

The cultural plurality around the pivotal art of living, through philosophy, religion, stories, crafts and the arts, contributes to ‘the good life’ in the cosmopolis we are living in nowadays.

The art of living is a pluriform and layered art of sense-making; giving meaning to life both on a personal as well as on a collective level.
This art is nourished by experience and reflection, based on dialogue, arts and crafts, including praxis (spiritual and physical exercises and practices) and storytelling. This pluriformity in the way people find answers to the questions of life is translated as the six dimensions in the Wheel (link “Use of the Wheel”).

We have to ask over and over again questions such as: Who am I?, What are we on earth for? and How to live life well?
Universal and definitive answers to these questions were given in previous periods. People in (pre)modern times were inclined to find their answers within fixed frameworks of religious and cultural ideas, stories and rituals of the (sub)cultural communities to which they belonged.

The ‘postmodern’ times demand temporary arrangements and provisional answers that mediate between and merge different (inter)cultural orientations; rather like a call to take responsibility for one’s own quest in the labyrinth of life.
In global society, sticking to universal and unambiguous answers to the questions of life actually means shutting oneself off from others and from life itself, which is constantly changing. That is why the Wisdom Web gathers wisdom from all corners of the world. This enables people to experiment and learn for themselves in order to shape life individually and in intercultural communities. The QFWF wants to stimulate this by organizing meetings and facilitating exchange and dialogue between individuals, groups and communities.

The Wheel visualizes forms of exchange between cultures and the fact that developmental processes take place in a multicultural, transcultural and intercultural way.

In the late modern era of globalization the world has in fact become multicultural. Cultures are connected with each other through digital, economic, social and cultural channels of exchange.

At the moment these connections between cultures are brought about from outside; as in a musical metaphor “a cacophony”.

Transcultural connections refer to a way of establishing not only multicultural cross roads but connections from within as well, thereby enabling cultural identities to change over time.
This way of transcultural development creates bridges between cultures and connectivity between wisdom traditions. Thus, creating in a musical metaphor “a harmony”.

For example: with the development of world music, world cuisine and ― less visibly ― in the mutual understanding of moral motives and utopian visions.
Cultural diversity is actually recognizable through its opposites: on the basis of shared religious, philosophical and mythological themes and practices.
For example, Joseph Campbell has described in his book “The Hero with a Thousand Faces” a culture-transcending narrative structure in myths throughout all regions in the world.

Also, mythical-religious symbols ― such as the tree of life, the elixir of life, the breath of life, the labyrinth ― occur in mythical stories from almost all cultures.

On the one hand, stories, symbols and proverbs are typical of a specific culture; on the other hand, they contain a core of wisdom transcending cultural boundaries. Such as “the golden rule” of morality as expressed in the proverb “in everything, do to others as you would have them do to you”, “what is hateful to you, do not do to your fellow man”, “a good beginning makes a good ending”. In addition, there seems to be an idea of natural coherence between man as a microcosm and the macrocosm, as the philosopher Pythagoras explained when he spoke of the ‘harmony of the spheres’. This illustrates a deeper understanding than just theoretical or practical knowledge. This concept of wisdom has been expressed throughout all cultures in different ways. For example, as ‘gnosis’ in old-Greek: knowledge from within. In the philosophy of Spinoza as the intuitive idea that god and nature are identical in essence.

No matter how diverse cultural expressions and representations may look at first sight, transcultural symbols as mentioned above, mythical stories on the genesis of the world, utopian visions, certain rituals and practices of the (philosophical) art of living, all seem to aim at the good life.

Intercultural literally means between (inter) cultures.
Intercultural exchange and development takes place on the basis of dialogues and in polylogical ways: by means of conversations in several media; not just verbally but also in the language of music and other arts; in education, in meditative and other practices.

Real interest in the other presupposes the courage to feel the tension of opposing values and acknowledges the beauty of a colourful spectrum between black and white. Differences in opinion might contribute to wisdom, that is: a deeper and shared understanding through a recognition of each other’s differences on important issues in life.

In this way, wisdom breaks down monocultural outlooks on life and grows by means of respect and appreciation of cultural diversity.
Just like natural diversity, the various cultural expressions contribute to inspiration and exchange. And, in a literal sense, the natural elements, like water, air, the earth and the sun, connect people as inhabitants of ‘spaceship Earth’ with each other.