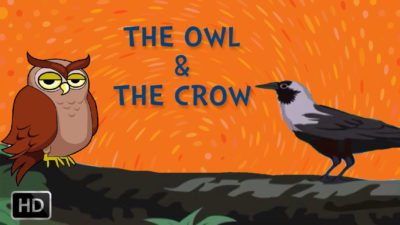 All of the birds in the jungle gathered for a meeting to discuss an important issue.  And all of the birds, except for the crows, were present.

The birds decided that they wanted to choose a new king to replace their present king, Garuda, who was too busy and did nothing to protect them they felt.
After some consideration, the birds agreed that because the owl can see at night, he should be crowned king.

On the day of the coronation, a crow arrived and questioned the birds about why they had chosen the owl as their king. Upon hearing their argument, the crow then pointed out the flaws in choosing the owl, pointing out that he was blind during the day, and suggesting instead that the eagle should remain as the king.

The coronation was canceled, and the owl, who was disappointed, declared that from then on, owls and crows would never be friends. The crow thereafter repented for giving unsolicited advice and then flew away.

Moral of the story: Do not offer counsel unless asked for. Further, the animals and birds lost a potentially good leader by focusing exclusively on one flaw rather than by considering all of the good qualities that the owl posseses.

Source picture: The Owl and the Crow