Ever since I was child, stories of beautiful fairies, handsome princes, brave lions, wise owl, cunning fox, cute little rabbit, and diligent mice have always fascinated me and sweep me off my feet to carry me to the world. Whether I was reading it or someone narrating it to me, I would become one among the characters and feel happy with the lion when it triumphed over the forest and saw myself standing in the crowd of other forest animals applauding, sad with the crow when it gets caught in the net and feel relieved when the mice comes along to help and find solution along with the princess and wait along with her till she is rescued.

My inclination to immerse myself in the sea of imagination swimming with characters that I read in the books fingers clutching my book with anticipation lying either in the garden enjoying the breeze and listening to the little birdies singing or on my bed wrapped up in the warmth of my blanket.
The memory of my Aunt reading out stories from a book called “Panchatantra” is still as fresh as the reality in front of me. The Panchatantra (“Five Treatises”) is an ancient Indian collection of interrelated animal fables in Sanskrit verse and prose, arranged within a frame story. The surviving work is dated to about 300 BCE, but the fables are likely much more ancient.
The text’s author is unknown, but has been attributed to Vishnu Sharma in some recensions and Vasubhaga in others, both of which may be fictitious pen names. It is likely a Hindu text, and based on older oral traditions with “animal fables that are as old as we are able to imagine”.

Story telling is an art in itself and my aunt excelled in it bringing the characters to life while she narrated me the stories with all the enunciations to a wide-eyed pre-teen. Though her visits were occasional whenever she visited from another city her story narration skill was memorable for me apart from her love.
Every Saturday we had school till 2 pm and I rushed home to have lunch and listen to the stories as it was “tacit appointment”. I read and was narrated to hundereds of stories however my favorite story from the Panchatantra is the following

The Brahmani and the Mongoose

Dev was a Brahmin who used to live with his wife in a certain town. One day, his wife gave birth to a son and they were very happy. They had a pet Mongoose even though they both loved it, she was not a fool and knowing that the mongoose was an animal in reality, she always kept a guard.

“He is a mongoose and will soon develop the animal instincts that he has inherited from his species. Some day, he may harm my own son. I shall always keep a watch on him.”

One day, she had to fetch some water. So, she put her son to bed, and while going outside with the pitcher, asked her husband to keep a watch.

“I am going to the well to fetch some water. Please look after our son and make sure the mongoose does not hurt him by mistake.”

The Brahmin was careless. Without informing his wife, he got prepared and went out leaving the little mongoose and their son alone by themselves.

As it happened, during the very time they were alone, a poisonous snake entered the house through a hold and started approaching the Brahmin’s son. When the mongoose saw this, he attacked his natural enemy to defend the child, who was like a brother to him.

Although he was small and the snake was strong, he fought with all might and bit the snake into pieces and eventually killed the snake. His mouth and claws were all smeared with the snake’s blood. The little mongoose was very proud of itself; and waited outside the house for the Brahmin’s wife. He was eager to show his mother how brave he was.

Knowing her husband’s carelessness, the Brahmin’s wife was tensed and was returning in a hurry when she saw the little mongoose coming towards her. She noticed that he was covered in blood, and without thinking, jumped to the conclusion that the mongoose must have attacked her son.
Angered and frustrated, she threw the heavy put — full of water, that she was carrying on the little mongoose. The little mongoose was severely wounded. She ran inside, and she was amazed to see her son safely sleeping in his cradle.
She then saw the snake near the cradle that had been torn into shreds. At once she realized what had happened. She was heart-broken with the thought of having hurt the little mongoose.

The wise indeed say: Think hard and do not do anything in haste.

Since I was a kid I was more prone to haste, impatience and impulsiveness which carried into my teenage years and young adulthood. During the dark moments in my adulthood, having made hasty decision or hurt someone with my rash, impulsive and abrasive tongue, the story of the woman who killed mongoose, who in fact had saved her baby always managed to crawl back to me teaching me to slow down, have patience, not to jump into conclusions before having evaluated all the aspects of the circumstances overriding the overwhelming emotions aroused at the first instance. 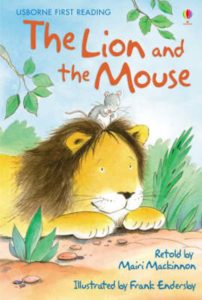 The other story that really inspired me was The Lion and the Mouse from Aesop’s Fables — Aesop (620-564 BCE) was a Greek fabulist and storyteller credited with a number of fables now collectively known as Aesop’s Fables.
Although his existence remains unclear and no writings by him survive, numerous tales credited to him were gathered across the centuries and in many languages in a storytelling tradition that continues to this day. Many of the tales are characterized by animals and inanimate objects that speak, solve problems, and generally have human characteristics.

The Lion and the Mouse

Once when a lion, the king of the jungle, was asleep, a little mouse began running up and down on him. This soon awakened the lion, which placed his huge paw on the mouse, and opened his big jaws to swallow him.

“Forgive me this time. I shall never repeat it and I shall never forget your kindness. And who knows, I may be able to do you a good turn one of these days!”

The lion was so tickled by the idea of the mouse being able to help him that he lifted his paw and let him go. Sometime later, a few hunters captured the lion, and tied him to a tree.
After that they went in search of a wagon, to take him to the zoo. Just then the little mouse happened to pass by. On seeing the lion’s plight, he ran up to him and gnawed away the ropes that bound him, the king of the jungle.

said the little mouse, very happy to help the lion.

Moral of the story: Small acts of kindness will be rewarded greatly.

Being born in India, where the word “Karma” is shoved into the daily conversation more often than the chilies in the curries, reminds me also of the biblical wisdom “what you do unto others will be done unto you”. Whenever anybody is in trouble or in need of help, I always remember this story which motivates me to be kind to others without any expectation.

Being an adult, in retrospect, I value the virtue of being kind to others more and more. As we know, life is very unpredictable and our status can change from one moment to another which can put us in a position of being at mercy of someone else. Just as how we feel grateful for someone’s generosity and kindness towards us, it is important to reciprocate.

As any child, devoid of prejudices of the adult world and with limited social circle, these stories fascinated me as curiosity abounded in the unknown horizons of life. When I encountered situations in life which stirred familiar emotions which was originally aroused by listening to the stories that either my aunt had narrated or had read in the book, I was definitely better prepared to articulate and assimilate the emotions to react best way possible rather than getting thrown off and inundated.

I will forever be grateful for my aunt for having patience to read out stories for me and for my parents for creating the space to nurture my creativity and imagination. It has really shaped the person who I am today.