The Case of African Philosophy 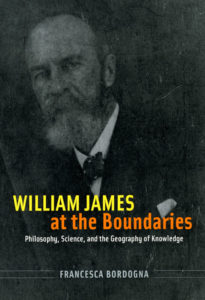 Bordogna begins her 2008 book on William James ‘at the Boundaries’[1] discussing how the pragmatist philosopher created confusion with his 1906 address of the APA, on ‘the Energies of Men’.

According to the closed-in minds of the professional philosophers, Bordogna writes, he only showed his own failure at good philosophy, by mentioning not only psychological and physiological insights, but also unscientific sources from popular spiritual healers and thinkers — in search for what could bring human beings to higher levels of mental and physical energy.

An approach like that of James would probably still get the same kind of reaction at most gatherings of professional philosophers. Philosophy is, they hold, about conceptually clear analysis of theoretical and practical problems, or, if one is into continental philosophy, about rich hermeneutic descriptions of structures and ideas. It is not about ideas of what James called “common, practical men”.

Philosophers can speak about their beliefs, of course, but not take these beliefs into the philosophical discourse itself — thus works the discipline’s exclusion of voices from ‘ordinary’ life. As Peter Park has shown in his historiography of the modern canon in philosophy, the gradual exclusion of religious and spiritual texts from philosophy[2], and the rewriting of its history to legitimize this move, has served the racist effects (if not motives) of the modernist, professionalized field.

The issue of racism in modern philosophy had earlier already been outlined by Emmanuel Eze[3]. His work and that of Park, implicitly also serve to bring philosophy, in post-Enlightenment times, again beyond the modernist boundaries that were challenged by James.

Pius Mosima’s recent book[4], which aims to provide a critical discussion of the concept of sagacity, as introduced by Henry Odera Oruka, now adds the case of African philosophy to this growing movement to bring philosophy beyond the boundaries.
And it does so in a new, deconstructive, way, not trying to write a ‘grand narrative’ of what’s African (like e.g. John Mbiti attempted almost fifty years ago), but by including (in between the lines of his discussion of the past seventy years of the African philosophy debate, and of the philosophy of Oruka) practical and narrative approaches to problems of life that root in African traditions into the field of philosophy. 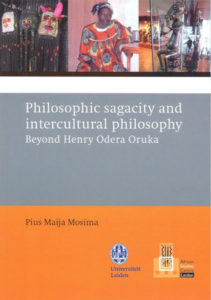 Thus his book, titled Philosophic sagacity and intercultural philosophy, simultaneously criticizes the Euro-American hegemony in philosophy, as well as the strict policing of its disciplinary boundaries that goes along with it, and does so more by showing how things can be done otherwise, rather than by highlighting once more what’s wrong with modernist thought.

At some points in his book Mosima is outspoken about his aim, as well with regard to its critical aspects, as to its constructive contribution to what he names ‘global wisdom traditions’. Below I want to highlight these outspoken moments, that add to a better view of what African philosophy could bring to the dialogical table of philosophy, as well as to a deconstruction of the modernist identification of philosophy with professional disciplinarity.

What the book offers beyond that I will leave aside here. But one can also find in it also a well-researched (and much needed) overview and discussion of the different positions in the debate about African philosophy since the publication of Bantu Philosophy by the Belgian missionary Tempels, shortly after WW II.
And of course a critical analysis of its main subject: Oruka’s philosophy of sagacity. Besides these two, very clear, main expositions, I was most intrigued by the general approach present in the book — which shows directions for a globalized philosophy beyond what Lewis Gordon has called disciplinary decadence[5].

What makes African philosophy a special case for doing so, lies in the fact that because

it has had to find it’s voice, as Mosima shows, through and beyond debates about the status of traditional and modern knowledge systems, about whether to adopt an essentializing identity as ‘African’ at all, and, finally, about how philosophy can deal with its universalizing urges and its always localized commitments.

This brings the author to adopt the view that

“Place and belonging become what we make of them through constructs of meaning and through the construction of community.”

This view sheds new light on the now globally so urgent matter of identity in a world that is increasingly interconnected through economic, political and even military processes. What’s more, it allows us (as I understand it) to take the achievements of African philosophy as a model for philosophizing in other places too.

Philosophy is then allowed to move beyond a fixed geography of space, and beyond the idea of contained ‘continents’ to a continuous hermeneutical negotiation of the places where we think from. Thus marrying traditional structures of understanding that we commit to, to nonlocal reflections. This movement makes it no accident that a deconstructive (dislocating) approach is pervasive in the book. According to its author “intercultural philosophy enables us to go beyond the particularism of the ethnophilosophers and the universalism of the professional philosophers […] and helps us deconstruct the hegemonic imposition of the North Atlantic model.”

Now the reader becomes intrigued to know what actual insights then, beyond the idea of an essentialized African tradition, African philosophy will bring to the global discussion. Here Mosima is not very explicit, but we can find many indications of where he would want to go to find such a contribution.

We find remarks such as

“We cannot interpret reality and search for wisdom just as abstract reality.”

Or, in a rather harsh criticism of those thinkers rejecting ethnophilosophy (like Hountondji, Towa and Oruka), we read that they are

“overrated and promoted merely for the sake of the triumph of the Western, individual, text-based philosophy that they project.”

Alternatively, philosophy should take seriously, even include, ‘collectively managed and owned worldviews’ — to put it in James’ words: the ideas and practices of dealing with life of ‘common practical men’.
Towards the end of the book, building from and critically dialoguing with Dutch intercultural philosopher Wim van Binsbergen, it becomes more clear what these ideas and practices in the case of the African heritage could be: besides traditional

“wisdom of the body, expressed and mobilized in every ritual act of therapy” “there are African local-level practices of conflict resolution and reconciliation”.

Thirdly, ‘comparative mythology’ is mentioned, as a source of symbolic knowledge of life available to human beings.

Towards a dynamic intercultural philosophy

In the end, in the promotion of his radically dialogical version of intercultural philosophy (which differs from the more static approach of comparative philosophy), Mosima proposes to

“look for an African sagacity that does not limit itself just to a ‘culture’ but goes beyond borders [taking into account]the oneness and interconnectedness of humanity.”

He also clarifies the importance of this move —

“to enable us to deal with common problems [for humankind, AR]across borders.”

Thus, if we follow this proposal, philosophy will go beyond many boundaries simultaneously:

Philosophy cannot be identified with reason, but is love of wisdom, be it present in abstract thought, in healing practices, or in therapeutic storytelling. Interestingly enough, all this is motivated by a commitment which reminds one of the pragmatism of William James, understanding philosophy as a way of dealing with shared human challenges of survival, and inviting into it therefore practical wisdom from all kinds of venues.

A long time ago I wrote in a Dutch magazine a short article[8] about the philosophy that could be found in the sayings of world famous and now mourned soccer player Johan Cruyff.
Some readers found that I had went too far in translating the intriguing words of Cruyff into philosophical language. I might have. Cruyff’s expressions should perhaps be taken to be philosophy already. I am not sure about it.

To the practical question of how to include the voices of ‘common men’ into philosophy William James did not yet produce clear answers. Pius Mosima does not provide us with them either. His book is more like a program, a guide of where he thinks a globalized philosophy should go.

But with this already quite radical program in hand — to let the case of African philosophy deconstruct and reform the North Atlantic hegemonic idea of philosophy as abstract reason — one is now expecting the next, even more radical step: to include the actual practical wisdom, the actual voices, rituals, institutions and stories from ‘daily life’ into philosophy and bring them into dialogue with each other as well as with those of — now recognized to be local in origin too[9] — Western-style disciplinary philosophy.

The page references follow the printed version of Pius Maija Mosima, Philosophica sagacity and intercultural philosophy. Beyond Henry Odera Oruka, published by the African studies Center, 2016. The book can be read online[10] too.