A few years ago, I started to write a work-plan, with the aim to see before me what I hoped to be able to do in the years before my retirement. This is weird, to write the (hush hush) word retirement here, in the public sphere, when in many ways (and I will not be the only one) I am feeling younger now then when I was younger biologically.
But lets be realistic. Before retirement there are opportunities (such as some, limited, funding for traveling, helping younger (sic) colleagues to write their PhDs, teaching as a regular university teacher) that will be gone after. Even though after retirement other things will be possible, one should do what one can do while in a certain framework.

The means should be especially mutual visits, collaborations, and exchanges between academic philosophy teachers. Regarding my expertise and interest, these should be organized primarily between African, African-American and European colleagues. This blog post is on this third element. I am happy that writing the plan seemed, by itself to create effects, and attract ideas, people, and actual opportunities. This has happened with regard to all three elements, and made me convinced that writing down one’s hopes and ideals has a kind of ‘magical’ effect to set things in motion. I recommend it to everone! 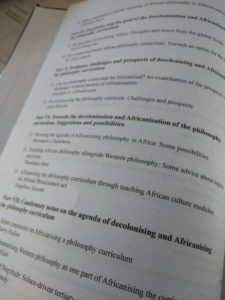 The hope to be able to do something towards decolonizing philosophy teaching got its first fulfillment in an invitation to speak on ‘teaching philosophy interculturally’ at the university of Essex in 2017. Others were the creation of a small network in the Netherlands of academics who want to do the same – a network on which I will write more another time.
And while visiting two conferences in Dakar, Senegal in 2017 and 2018, one which was a joint project of Senegalese and American philosophers, I had the privilege to see even more styles of lecturing, of working together, than my visit to Calabar, Nigeria in 2016 had provided me with – as it was that Nigerian visit that had raised the desire to be able to contribute more to this larger movement of decolonizing academia.
It may have been the enthusiasm of Jonathan Chimakonam, the organizer of the Nigerian conference that made me think such an exchange would be realizable, despite the many obstacles I perceived, among which access to funding is only a minor one. Chimakonam is very active on this issue, in writing as well as in organizing opportunities for academics. So his article in this new book, Decolonisation, Africanisation and the Philosophy Curriculum I had already read before the book came out. 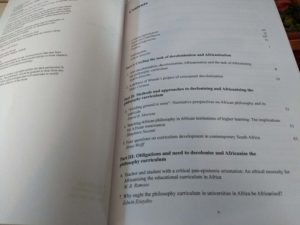 This book gathers together fresh views of colleagues who deal with all of its title, not only in theory, but in the classroom, which in many cases, especially in South Africa, involves outside-of-the-classroom confrontations as well. This book gathers academic work in which the personal element is never far away. Personal experiences, personal interventions, color the critical reflections and positive proposals to change philosophy, not just for the benefit of Africa, but globally. Its editor, Edwin Etieyibo, writes in the introduction that is gives a contribution: “to the fields of decolonisation, intercultural and postcolonial studies, as well as an essential resource for the discipline of philosophy, not just in Africa but globally.” What I like about the book is that it offers reflection as well as very practical deliberations on how to organize a decolonized curriculum. Such as the discussion by South African Ernst Wolff on the respective advantages of teaching ‘dedicated’ or ‘integrated’ modules. In other words: should one leave the ‘modern philosophy’ course and all the other courses white as they are, and add a ‘diverse philosophy’ course to let students know there is more to be explored, or should one aim for unwhitening all the regular courses immediately. In a process of change, he defends alternating between the two. Chimakonam also writes on program development and distinguishes, more radically, three possible approaches, intriguingly called plan C (competition), plan B (balance) and plan D (displacement). In my words: should the ‘colonial’ program be replaced with an Africanized one (D), should one let a Western and an African program compete and observe what it does for its students (C), or should one offer Euro-American and African philosophy courses simultaneously, to let students come to their own conclusions or combinations? These proposals stir the reflection that is so much needed.

Very practical and useful is the article by Thaddeus Metz that aims to introduce newcomers to African approaches in philosophy to what’s characteristic and what one could read – ordered by classical course subjects such as political philosophy, epistemology and metaphysics. This is a must-read for any philosopher who is used only to the Western curriculum and thinks African philosophy is just some ‘fun’, ‘exotic’ subject – (s)he will discover on the contrary that all previous, culturally limited, conceptions of what philosophy can be and can do, were wrong. Munamato Chemhuru returns to the decades-old debates on what ‘African’ in ‘African philosophy’ can mean, and shows why this question should be explored once more. He argues that Africanizing the philosophy curriculum is fully consistent with the requirements of philosophy to be a critical discourse. To do so, he will have to reject the false images projected by anthropologizing studies of Africa that make all thought developed on the continent an element of essentialized and traditionalized cultures. “If Africanisation is properly understood as a process that involves putting African epistemology at the core of philosophy in Africa, instead of cultural anthropology, and continuing to accuse Western philosophy for its predicament, then the agenda of Africanisation can be achievable.”

These are just a few of the many topics in the book that interconnect in intriguing ways. To my view this is a must-read for any philosophers interested in curriculum change and development, in decolonizing the classroom, and their philosophy departments along the way. I hope the third element in my work-plan may materialize further in the coming years, and with the help of, among others, this book, and its writers.
Let me dream: wouldn’t it be great to have masterclasses for philosophy professors interested in curriculum change and development of new inclusive ways to teach, where some of these African colleagues come to put us all to work, in critical reflection and in learning new styles of teaching. To discover a new wealth of approaches to classical subjects in philosophy, and to critique, in the end, this ordering of what is classical as well.