Airing grievances during the Hogbetsotso 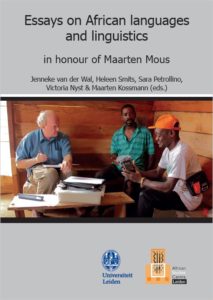 Hogbetsotso ‘coming from Hogbe’ is a festival celebrated annually in the first week of November by the Aŋlɔ-Ewes of south-eastern Ghana.
Hogbetsotso is significant for many reasons: it provides the people the sense of pride to know who they are, where they come from and then mark the beginning of the traditional year.

It is also the time to offer thanks to God, the ancestors and spirits for the protection in the past year. The festival is also concerned with the reconciliation of the people, renewal of the loyalty to the chiefs and the opportunity to know one another as a people belonging to the Aŋlɔ state.

Essays on African languages and linguistics in honour of Maarten Mous

[1] Source: Women dancing at a cultural festival in Ghana

is a Ghanaian former visiting research fellow of the African Studies Centre Leiden (2019). He was awarded his PhD in 2008 at Leiden University for his study on the documentation of the language and culture of the Logba population in Ghana: A grammar of Logba (Ikpana).

Ananse and the crocodile

Hornbill, cousin to Eagle the king

I am not concerned

Why the crab has no head